The Beefalo fly-in to Weller Farm’s grass strip is a September tradition. George Weller raises these cattle which are a cross between a bison and domestic beef cattle. They were historically raised for their better physical attributes and the hardiness of the bison. He also grows some delicious corn. Both beefalo burgers and sweet corn have been a hit with pilots for years. – Ed.

These photos were taken by Gord Larson at Stanstead/Weller Airport (CTQ2) on September 12, 2020. One of the charms of Weller is that it sits on a high plateau, from which you look down on the Eastern Townships in all directions. The lake you cross is Memphremagog. Editor Ian Brown has flown near here a lot. My dad (1896-1975) allowed that in fall the Eastern Townships provides the prettiest scenery in the New World.

They show what appear to be a recently completed Pietenpol Air Camper C-GRSF. Never saw the builder, perhaps eating beefalo burgers and fresh corn on the cob. It appears to be registered to Roch Messier, who flies out of Neuvillle, near Québec City.

The next shot also shows the Air Camper again. Under the wing is C-GPLL, a Bakeng Duce that I flew in from Lancaster Airpark. Gord Larsen and I flew in over the Sutton Mountains which in the morning was almost cold enough to freeze joints but not quite. The trip back saw warmer skies so we smiled and relaxed all the way. C-GPLL is open cockpit. The scenery eases the cold.

Round trip from CLA6 to CTQ2 is just short of 3 hours. On the flight east I flew at 80 knots and used say 22 litres of premium fuel. On the flight back we did 100 indicated but burned 32 liters of fuel. That expense saved us just 15 minutes. Only you can say whether 15 minutes saved is worth $14 in fuel. It’s doubtful. We landed with 45 minutes fuel remaining.

Montreal’s TCA can be avoided by flying south just north of the U.S. border. We were almost on top of the border crossing at Lacolle. Even being a Saturday there were virtually no cars on the highway either side of the crossing. I use a knee-mounted iPad running the basic version of ForeFlight.

If you wanted to you could zoom in, touch the desired airport, make that a route and fly there. Fuel vs time is very handy. More planning and entering aircraft information means that you get every possible bit of flight information.

These two shots of us in my Bakeng Duce were taken by Ed Hannaford before leaving for CTQ2. Ed had a nice cold beer ready for us when we arrived back.

It was a pretty nice morning to fly and a nice opportunity to see and experience George Weller’s nice grass runway. I took off from Bromont Airport (ZBM) in Québec at 10 a.m. and the weather was perfect for such a fly-in and of course I was not the only one having this thought. Taking off from Bromont in my Cessna 150 CF-ZZC with my wife Carole, we soon flew beside and over the mountainous ski areas of Mont Bromont, Sutton, and Owl’s Head, to finally cross the magnificent Lac Memphrémagog.

We could see that sailing was also very popular that morning. As we were over the lake we turned our radio frequency to 123.2 to find that it was going to be a popular event. We could hear an airplane 10 miles west, another on a two mile final for runway 19, another saying we are number two and then number three following number two.

In short, we knew that we were at the right place to enjoy a great morning. After flying over the field, I set up to follow two other aircraft.

With some distancing we all landed and cleared the runway without having to overshoot. There were three areas where we could exit the runway and this made me think that our host, George Weller, knew what to do to help people enjoy his farm’s nice airport.

We were able to see all sorts of aircraft from Van’s RVs to ultralights to more complex aircraft. We also admired a retractable VL3 Evolution capable of a cruising speed of 150 knots with a Rotax engine using 5 gallons of gas an hour.

There was plenty of parking since they had planned to park the airplanes in three different rows.

Beefalo burgers and sweet corn were already cooking and boiling when Carole went to get a coffee. It was a good day to see and meet new friends and Carole, who had just decided to retire from Air Canada as a flight attendant, enjoyed seeing an old friend and pilot from Air Canada who himself has retired and since he moved to this nice countryside area and parked his little aircraft here, in one of the two hangars.

From Weller farm you can admire the Vermont mountains as well as Jay Peak, quite a dream area for lovers of landscape paintings. There were gardens/orchards near the runway and one interesting fact: last year, they found out that they may be the only anytime, drive-in, fly-in, you-pick in North America as COPA’s magazine stated in it’s ‘On The Horizon’ section. Thank you George Weller and all his friends and family who organized this fly-in, like Rosaire Provencher our first contact after landing.

We hope to see you next year! 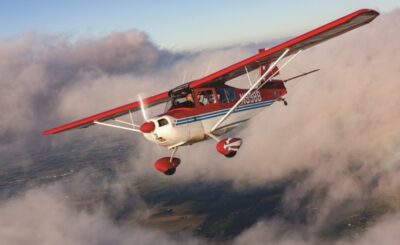 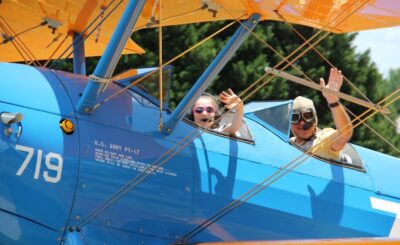 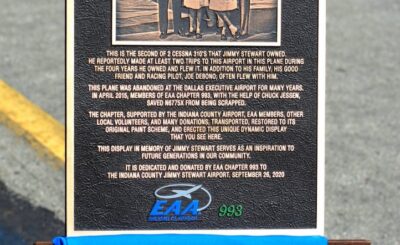