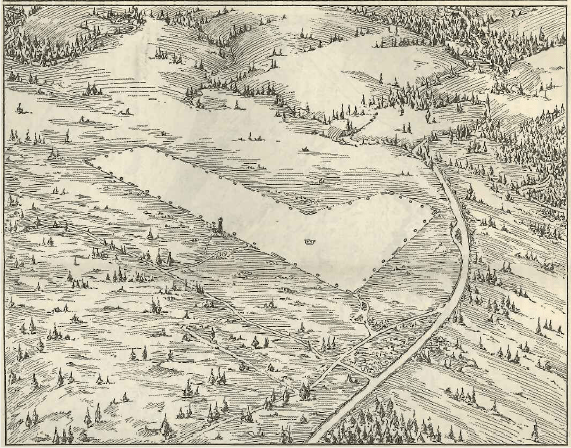 You’re a U.S. Post Office Department worker in the early 1920s. Modern aviation is barely 20 years old, and you’re trying to figure out how to create a navigation system for pilots in the fledgling air mail service to fly from city to city, across the entire United States. At this stage, it’s visual flying only — Jimmy Doolittle’s first “blind flying” experiments won’t be until 1929.

What do you come up with?

How about a bunch of giant arrows?

That’s exactly what the post office did. Yes, the post office was in charge of aerial navigation for mail at this point. The Department of Commerce (DOC) did not begin regulating aviation until 1926, so early air mail routes were planned under the authority of the U.S. Post Office Department. It laid these airways out in much the same way as the railroads and early highways below, connecting cities as the air mail system expanded. Eventually these airways were organized into 34 numbered Contract Air Mail (CAM) routes, though the DOC referred to them by their terminus cities for navigation purposes (for example, Oshkosh lies along the Chicago-Green Bay Airway).

Building the Airfields That Used the Airways

Each airway strung together airports in a roughly straight line. Having airports along the way was important, because in the 1920s and ’30s, en route weather was harder to obtain and aircraft were far less reliable.

In areas without suitable landing fields at regular distances, Department of Commerce Intermediate Landing Fields (DOCILFs) were constructed along the way to allow pilots in distress to set down. These were primitive airports, even by the standards of the day, that had limited facilities for servicing aircraft. They mainly functioned as a place where a pilot could set down and wait out the weather. Most had staff on-site to assist pilots in weather planning. A 1927 book entitled Airports and Airways says of ILFs, “Owners of expensive airplanes are not likely to risk operation along routes where such facilities are not provided.”

Small airports in this era were little more than large grass fields, allowing pilots to get creative with their landing areas for any given wind direction. Since DOCILFs were not meant for frequent operation, mixed agricultural use was common. However, Airports and Airways notes that “if livestock are allowed to graze on intermediate landing fields, an attendant should be constantly at hand to clear the field upon the approach of aircraft. Many accidents have been caused through collision with stock, as an airplane landing or taking off must continue in a given direction and cannot dodge frightened animals.”

Some of these DOCILFs matured into modern-day airports, one of many lasting legacies of the Federal Airways System that lives on in present-day aviation infrastructure.

Lighthouses of the Sky

At each airfield, and at approximately 10-mile intervals in between, were the airway beacons. The government built different types of beacons depending on the year of construction and the location, but in general, each beacon had a system of lights — more on that below — and an arrow that pointed to the next station, which by convention was either to the north or east. On early beacons the arrows were concrete, but later designs used sheet metal. For obvious reasons, most of the arrows that survive today are of the former type.

Power for the lights came either from the existing electrical grid in areas that had power or from a generator. Sites that had generators enclosed the unit in a small shack that usually had the identifying information for the site — the airway name and site number — painted on the roof (so Station 46 of the Los Angeles-Salt Lake Airway would be “LA-SL 46”). Some sites in windy areas even had electric wind turbines to power the lights.

Like the lighthouses that mark the rocky shorelines and shoals of coastal regions, airway beacons were often constructed atop hazardous terrain along their routes. Workers would haul supplies up to mountaintops and mesas to build these beacons. A 1932 Air Commerce Bulletin even contains an illustration of workers using donkeys (or “burros”) to haul beacon components up remote hills in the southwest.

It is hard to overstate just how big this network of beacons was. By 1932, there were no less than 46 designated airways, covering thousands of miles. Each airway had beacons at regular intervals — close to 100 on the longest routes. In an age before radio navigation, the beacons were really the only reliable way to cross the country at night without resorting to dead reckoning with a compass and stopwatch. In the daytime, the numbered arrows offered assurances that pilots were on course.

Each beacon would also have two “course lights” aimed in the direction of the two neighboring stations along the line. These lights would flash a Morse code identifier at the pilot approaching the station. As Jeff Skiles noted in his column on airway beacons (“The Lighted Airway System,” Contrails, EAA Sport Aviation, July 2016), each beacon flashed a single letter, and the order of letters was WUVHRKDBGM, repeating every 10 beacons.

Why this sequence of letters? That’s a good question with a very interesting answer! When I was doing my research, I noticed that the 1932 Airway Bulletin refers to the code as a repeating sequence of code “numbers,” 1-10. But Jeff correctly points out that the actual characters used are letters, and even refers to a handy mnemonic (“When Undertaking Very Hard Routes Keep Directions By Good Methods”). It turns out that the characters are abbreviated versions of American Morse code numbers 1-10. Perhaps they were abbreviated to fit the constraints of a regularly timed light sequence, but whatever the reason and intentionally or not, these abbreviated American numbers correspond to the sequence of International Morse code letters referenced above. American Morse code gradually fell out of use by midcentury, and today what we think of as “Morse code” is International Morse code. Thankfully, none of this mattered in practice since codes were listed on the chart corresponding to each beacon.

Long Live the Beacons! For Now

If there is one thing the aviation industry values, it’s redundancy. While the first cross-country network of low-frequency radio ranges (more on that in a future article) was in place less than a decade after the first lighted airways came into being, the FAA did not decommission the last beacon until 1972 (this beacon is now in the National Air and Space Museum in Washington). The federally maintained airway system lasted from the pioneering air mail days all the way into the era of jet airliners and space travel.

Except, that wasn’t the end of the story. The state of Montana, valuing the role some of its beacons played in marking the way across dangerous mountain peaks, retained 17 beacons, and under state control these beacons soldiered on. Unfortunately, budget cuts in 2017 forced the closure of all but three beacons, but efforts are progressing to keep these beacons functioning as a link to the past for the foreseeable future. Sectional charts still mark the beacons using nearly identical symbology to the charts of 90 years ago. Each beacon is marked by a blue star, with arrows pointing in the direction of the next beacon and the course lights. Next to the star symbol is the number of the beacon, the same one it was assigned in the 1930s, and the Morse code identifier still flashed by the course lights. Using these remaining beacons, it is still possible to navigate in 2019 using the same navigational aids that guided Charles Lindbergh in his air mail days.

Concrete Arrows in the Desert

At one time, airway beacons dotted the entire country. But as the system gradually came offline, most fell victim to redevelopment. Still, you can still find the remnants of stations in most of the Lower 48 states, and there may yet still be a few undiscovered (important — most former beacon sites are on private land; no trespassing!).

There are, however, many intact arrows in the desert southwest, where beacon sites were too remote to warrant destruction. When John Egan and I flew the 2018 One Week Wonder from Phoenix to Oshkosh, we partially followed CAM 34, an air mail route initially surveyed by Lindbergh himself across the southwest. It was operated by Transcontinental Air Transport, and it was the route of the first coast-to-coast passenger service, using a combination of Ford Tri-Motors by day and trains by night.

One of the websites I leaned upon heavily for this article is Arrows Across America by Brian and Charlotte Smith. It lists most of America’s remaining beacons, with exact coordinates for all of them. On the airliner to Phoenix I loaded CAM 34’s beacon coordinates into ForeFlight, and once John and I were across the Continental Divide in the One Week Wonder we had an entertaining aeronautical scavenger hunt as we made our way east. We flew from beacon to beacon, and we found evidence of around half a dozen. One of the best preserved sites is the Cuervo DOCILF, which contains an intact and still-painted arrow, and what we believe is the original airport marker of the landing field.

We also stopped at the Grants-Milan airport in New Mexico (KGNT) for lunch on our first day. It has an outdoor museum dedicated to different artifacts of the airway system, including a relocated beacon tower, generator shack, and reconstructed concrete arrow. The museum offers tours of its buildings every Saturday from 9 a.m. to 1 p.m.

EAA has several historic beacon towers on its property — one at Pioneer Airport, two in Camp Scholler, and one in the museum that lights up every time the Pioneer Airport shuttle departs. You can also find these towers at places like Brodhead Airport in Wisconsin and Antique Airfield in Blakesburg, Iowa. Also remember that airport beacons themselves were part of the airway network, so if your airport has an older beacon tower, it may date back to that era.

We celebrate many aspects of our aviation history, but one that sometimes gets overlooked is the history of air navigation. This is a shame, because I believe it is one of the best ways we can feel a connection with the aviators of the past. When you shut off your GPS and fly by pilotage for a while, think about all of the pilots who have flown down that river valley, or passed by that city, before you. What were their lives like? What do they share in common with you? When you pass by a concrete arrow in the desert, or see one of the Montana beacons on a clear night, think about the air mail pilots who came through the same way, with nothing but a map, compass, and single-engine biplane against the cold night. To me, that’s the value of studying aviation history — the link to the past and the sense that all of us are part of the same great adventure in flight.

air mail, HISTORY, Honoring The Past 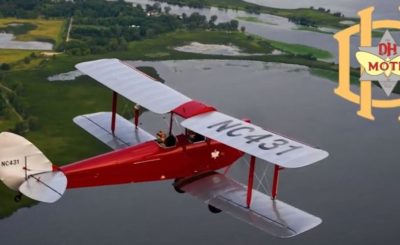 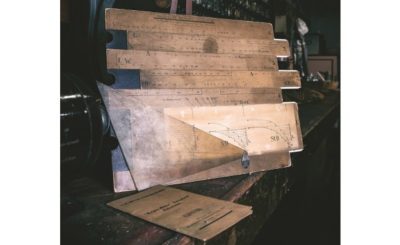 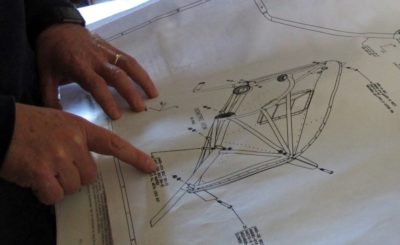