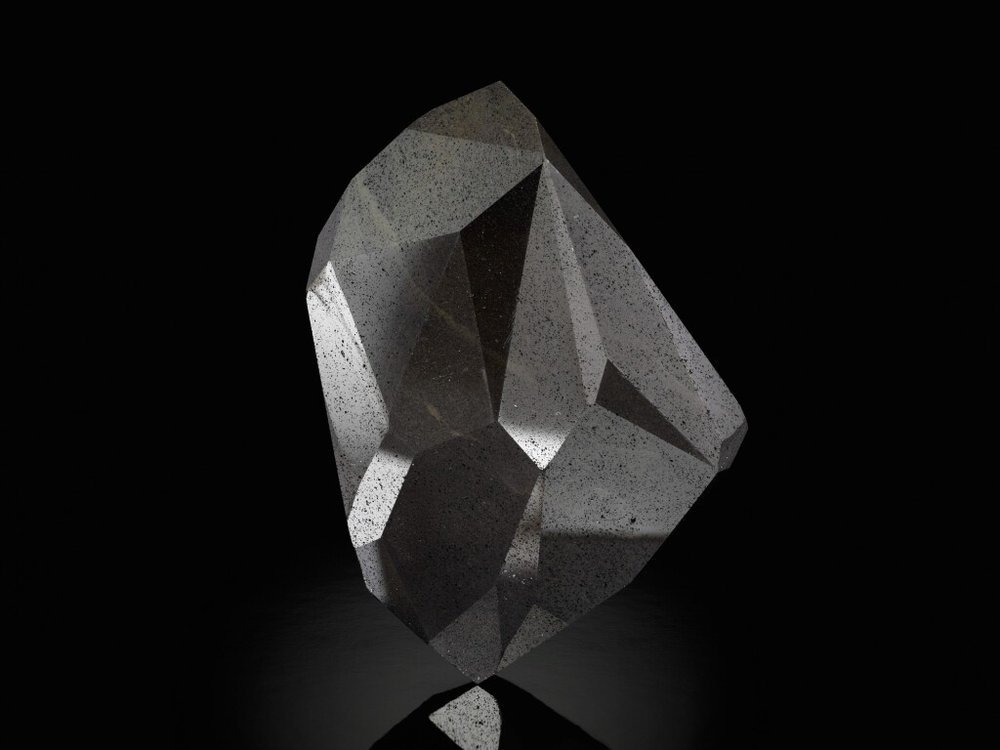 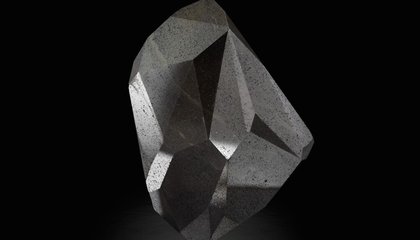 A one-of-a-kind black diamond dubbed the “Enigma” will go up for auction next month and is expected to sell for more around $7 million USD. The diamond was unveiled Tuesday by Sotheby’s Dubai, who says the massive black gem may have come from outer space.

The Enigma, which has been cut to weigh exactly 555.55 carats and has 55 facets, is believed to be the largest cut black diamond in the world.

“The shape of the diamond is based on the Middle-Eastern palm symbol of the Khamsa, which stands for strength and it stands for protection,” jewelry specialist Sophie Stevens says to the Associated Press. Because Khamsa means five in Arabic, “there’s a nice theme of the number five running throughout the diamond,” she says.

The gem was on display earlier this week before it will travel to Los Angeles, and then to London for the online auction in February. Sotheby’s says they expect the diamond to fetch at least 5 million British pounds—around $6.8 million USD, because of its unusual color, shape, and weight. The diamond will be open for bidding online from February 3 to 9, and Sotheby’s will also accept cryptocurrency payments, per CNN’s Isabelle Jani-Friend.

Another major selling point for the diamond is its supposed cosmic origin. According to a press release from the auction house, the Enigma is “thought to have been created either from a meteoric impact or having actually emerged from a diamond-bearing asteroid that collided with Earth.”

But some experts remain skeptical of these otherworldly claims. “Not so sure it came from outer space,” Tim McCoy, curator of the meteorite collection at the Smithsonian National Museum of Natural History, tells NPR’s Debbie Elliot.

Some diamond experts have pushed back on the idea that the gem came from outer space, noting that the Enigma could have originated on Earth. Black diamonds get their spooky hue from high levels of minerals like graphite that cloud the stone. The Enigma is likely a specific type of black diamond known as a carbonado diamond that appears much darker than other black diamonds because of its light-absorbing structure.

Previous carbonado diamonds have been found in either Brazil or the Central African Republic, though exactly how and where these diamonds form is still a mystery. Some black diamonds do have cosmic origins, but those gems created by meteorite impacts are usually much smaller than the Enigma. McCoy tells NPR it could have formed underground on Earth some 4 billion years ago, but no one knows for sure.

The fact that the Enigma has been cut also makes it harder to deduce clues about its origin, says Richard Ketcham, a geoscientist at the University of Texas at Austin, Harry Baker reports for Live Science. “The outer surfaces of carbonados likely have clues bearing on their origin, which are now probably lost,” in the Enigma, he added, which makes him skeptical of the auction house’s claim that the gem hailed from space.

“We think of outer space as this really exotic place; but think of inner Earth as a really exotic place. We don’t really know very well what the deep, deep Earth is like,” McCoy tells NPR. “Every rock has a story, and we just have to know how to listen to it. And I think this is a rock that we can’t quite understand its story yet. But it’s going to be a really good one when someone figures it out.”