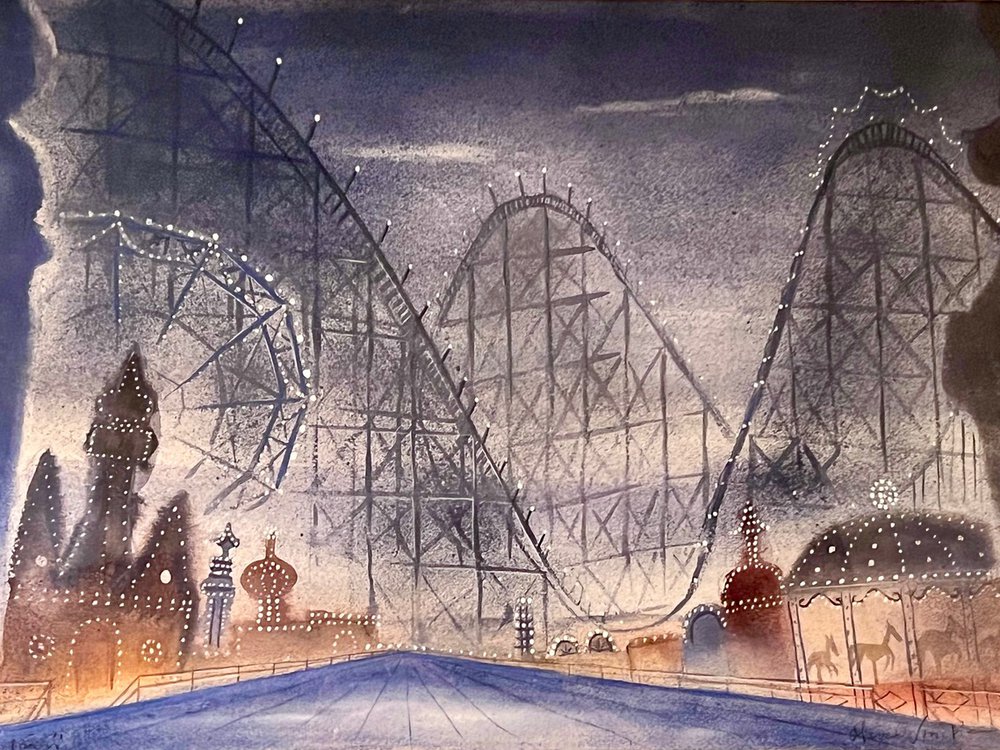 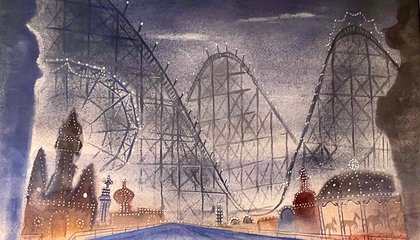 But they were just part of the attraction; the era was also known for its stunning production design. Painstakingly crafted costumes were de rigueur, and backdrops and even curtains could resemble veritable works of art.

That artistry is being celebrated in You’ll Be Swell, You’ll Be Great, a new exhibition on view through August 31. Presented by Helicline Fine Art, it can be viewed in person at the gallery via appointment and online at Helicline’s website, artsy, and 1stDibs.

The exhibition gets its name from a Stephen Sondheim-penned lyric in “Everything’s Coming Up Roses,” a signature song first belted by Ethel Merman in Gypsy’s original Broadway run.

The artwork on display is just as iconic, and runs the gamut from design drawings to set paintings and photographs. There’s a picture of Barbra Streisand and Judy Garland at work in matching gingham outfits, a watercolor design for the third act curtain from On the Town, and a drawing of the costume Carol Channing wore during the eponymous number in Hello, Dolly!

Other shows featured include Cat on a Hot Tin Roof, My Fair Lady, Cabaret, and Bye Bye Birdie.

“You look at Freddy Wittop‘s costume design for Carol Channing [in] Hello, Dolly! and remember it as an age when great original musicals were made for big stars,” theater historian Laurence Maslon tells NPR’s Jeff Lunden. “You look at these exhibits and these drawings through what you know of today. And you just marvel at the personal skill of the artistry in pen and ink and watercolor and pencil that these titans of the mid-20th century had.”

The artworks come from gallery owner Keith Sherman’s private collection, which he’s curated over the years with his husband, Roy Goldberg. Though most of the exhibited pieces are from Broadway’s Golden Age, the collection spans from the 1920s to the 1970s, per Broadway World’s Stephi Wild.

Sherman’s main job is as theater publicist whose firm represents Broadway shows, and his many years in the industry have given him a discerning eye for theater and film-related artwork. “I only buy things that I love,” he tells NPR.

Some of the included pieces are by iconic caricaturist Al Hirschfeld, whose drawings of Broadway’s finest appeared in the New York Times and the New Yorker and are still on display at Sardi’s, a theater district restaurant where actors know they’ve “made it” once their caricature gets hung on the walls.

Writing about his death in 2003, the Los Angeles Times’ Myrna Oliver reported that Hirschfeld looked down on the typical caricature practice of exaggerating “anatomical defects” and instead “sought to go deeper” in his drawings.

“Looking at a Hirschfeld drawing of yourself is the best thing for tired blood,” playwright Arthur Miller told the Los Angeles Times at the time. “He makes us all seem like a purposeful, even merry band of vagabonds whose worst features he has redeemed.”

The collection also features the original drawing of an iconic cubist poster of Josephine Baker by artist Jean Chassaing. Baker, a Black woman, found the success in France she was denied in the 1920s United States. Best known for her Folies-Bergère dance in a banana-ornamented G-string, Baker later became a spy for France by passing along secrets she overheard when performing for the Nazis. After returning home to the U.S., she was one of the few women who spoke at the March on Washington in protest against racial injustice.

Another artifact, a black-and-white clapper board used on the set of the film adaptation of Cabaret, highlights the close connections between Broadway and Hollywood. The original production of the John Kander and Fred Ebb musical ran for over 1,100 performances beginning in 1966. The 1972 film kept choreographer Bob Fosse, who also directed the movie. But it added Liza Minnelli in the lead as Sally Bowles instead of Jill Haworth, who originated the role.

“From day one of my professional life, I have been working in entertainment, primarily the theatre, selling two hours of magic in a dark room,” Sherman says in a statement. “Some of these artists were friends, even clients. Their work has great significance to me, and I believe it will resonate deeply with those who love entertainment and the arts. These works are fine art.”

“You’ll Be Swell, You’ll Be Great” is on view through August 31 at Helicline Fine Art in New York via appointment and online at Helicline’s website, artsy, and 1stDibs.