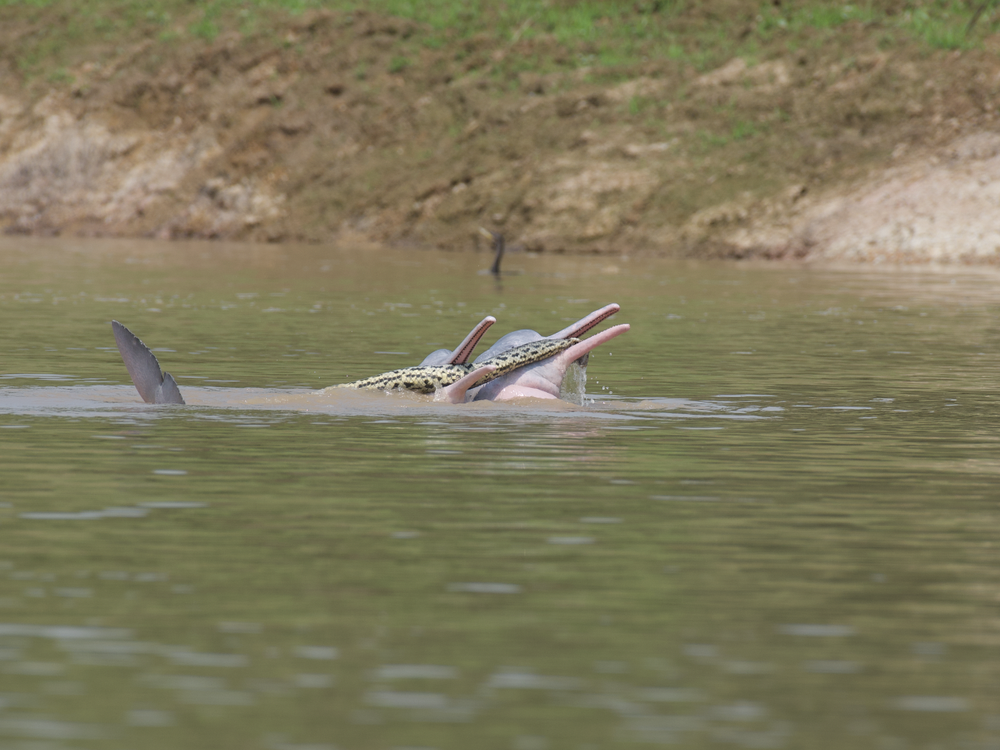 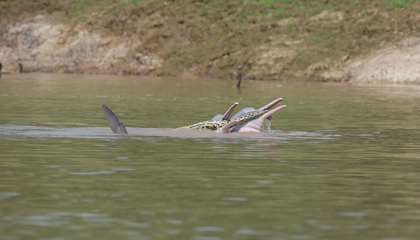 Two male Bolivian river dolphins astonished scientists in August 2021 near the Tijamuchi River in Bolivia. River dolphins don’t usually keep their heads above the water for long, so when the biologists spotted the marine animals surfacing they immediately started to take photos. Upon reviewing the images, the team found that the dolphins were holding a Beni anaconda in their mouths, reports Carolyn Wilke for the New York Times. The behavior has not previously been seen, and it is the first time an interaction between a Bolivian river dolphin and a Beni anaconda has ever been recorded.

Both in captivity and in the wild, dolphins are known for being playful with other animals voluntarily or otherwise, reports Science Alert’s David Nield. The team, which published the observation last month in the journal Ecology, suspects that the dolphins were not trying to eat the snake but were playing with it. The strange interlude lasted seven minutes, reports Business Insider’s Kelsey Vlamis, and the semiaquatic anaconda most likely perished from being submerged for so long. The biologists do not believe this was an incident of predation because Beni anacondas are apex predators, and researchers have not documented the boas being eaten except in one case of cannibalism, the New York Times reports.

The scientists still have many questions about why the dolphins held the anaconda. Looking more at the photos, the Stanford group realized that the dolphins holding onto the anaconda while swimming in unison had erect penises—further evidence that the interaction was playful, Business Insider reports. “It could have been sexually stimulating for them,” Diana Reiss, a marine mammal scientist and cognitive psychologist at Hunter College in New York, not involved with the study, tells the New York Times. “It could have been something to rub on.”

Biologists are aware of the dolphin’s sexual tendencies and have observed them rubbing their genitals on toys or inserting their penises into various objects, animate and inanimate. According to the New York Times, the marine mammals also use their penises for tactile interactions.

Since younger dolphins were around during the interaction, it is also possible that the adults were showing the juveniles the anaconda and teaching them a hunting technique, per the New York Times. However, Sonja Wild, a behavioral ecologist at the Max Planck Institute of Animal Behavior, is skeptical about this explanation. Wild, not part of the study, surmises that the behavior was not instructive, and the juveniles were instead present because they were curious, the New York Times reports. She also wondered how the dolphins got to the snake in the first place. Anacondas are strong, so this particular one may have been injured or dead before the dolphins grasped onto it.

River dolphins inhabit muddy waters, making them extremely difficult to witness. So, any observation, no matter how unusual, helps researchers understand how the creatures, threatened with extinction, may spend their time, per Science Alert.