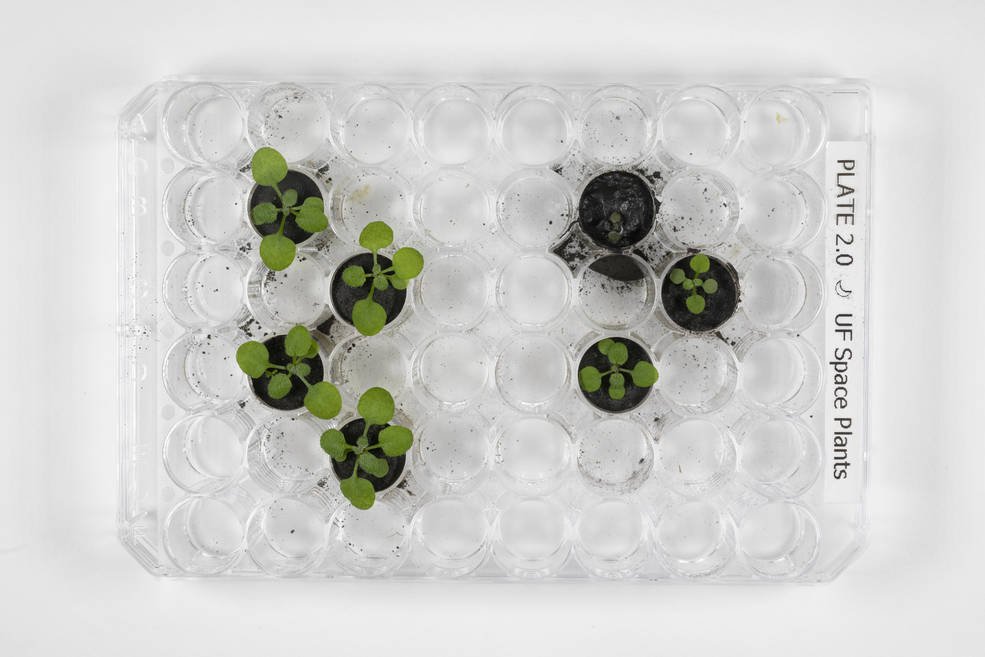 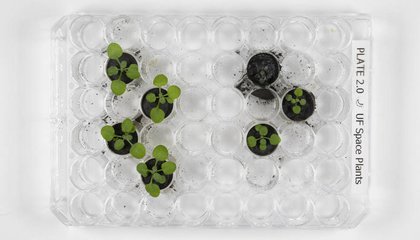 Between 1961 and 1972, on a total of 14 Apollo program missions, NASA scientists were able to test key technology used to bring astronauts to the moon and back. The Apollo missions also brought back 842 pounds of lunar rocks, core samples, sand and dust from the lunar surface, which reseachers can request for study. In a historic first, a group of University of Florida scientists have grown plants in a small portion of this soil from the moon.

While the plants were slow to develop and appeared stressed, the groundbreaking experiment proved that thale cress (Arabidopsis thaliana), and perhaps other species like the model organism, could sprout and grow in soil unlike that on Earth’s, reports Gizmodo’s George Dvorsky. The biologists behind this new study spent 11 years sending NASA formal requests for the soil. “Once we knew the minimum we could work with, one gram per plant, we knew how much to ask for,” the team told Gizmodo. “In order to make the study statistically robust, we needed four plants per lunar sample. That formed the basis of our request to NASA for samples.”

Their study, published this month in Communications Biology, describes how plants growing in the lunar regolith collected during the Apollo 11, 12 and 17 missions exhibited stress responses similar to plants reacting to salt, metal and reactive oxygen species. While less than ideal, the results may help lay the foundation for growing plants that supply food and oxygen on the moon, CNN’s Ashley Strickland reports.

Previously, researchers have grown plants, including food crops, aboard the International Space Station. They have also dusted lunar soil on plants to show that soil samples brought back from the moon do not harbor pathogens or components that may harm terrestrial life, CNN reports. In taking it a step further, the scientists wanted to see if plants could one day be grown on the moon and support future space missions.

“For future, longer space missions, we may use the moon as a hub or launching pad,” Rob Ferl, a horticultural expert at the University of Florida and study co-author, said in a statement. “It makes sense that we would want to use the soil that’s already there to grow plants. So, what happens when you grow plants in lunar soil, something that is totally outside of a plant’s evolutionary experience? What would plants do in a lunar greenhouse? Could we have lunar farmers?”

Lunar soil is vastly different from Earth’s soil. It contains shards of volcanic glass and no organic elements, and it is constantly bombarded with radiation, per Gizmodo. The researchers had just 12 grams, or 2.7 teaspoons, of the precious soil at their disposal, and so they conducted a small-scale experiment where each plant was planted in one gram of the soil, a NASA statement explains.

Researchers placed seeds in the samples, watered them and then put the trays into a terrarium box, to which they added a nutrient solution daily. When adding water to the lunar samples, the team found that it beaded up on the surface of the soil, so each sample had to be stirred to ensure the soil was uniformly wet, a statement explains.

“After two days, they started to sprout!” Anna-Lisa Paul, a horticulturist at the University of Florida and the first author of the study, said in a statement. “Everything sprouted. I can’t tell you how astonished we were! Every plant – whether in a lunar sample or in a control – looked the same up until about day six.”

The plants in lunar soil were compared to a control group of plants grown in volcanic ash and a lunar soil simulant known as JSC-1A, Gizmodo reports. However, observations after day six found that the plants in lunar soil were growing differently and were notably not as robust as the control plants. Arabidopsis thaliana grew more slowly, had stunted roots, smaller leaves, and had some reddish pigmentation, a sign of stress.

After 20 days, the team ground up the plants and studied their RNA. Upon sequencing the RNA, researchers identified that the plants expressed patterns of genes related to stress response seen in the thale cress when soils have too much salt or heavy metals, a statement explains. The plants also reacted differently depending on where the soil was collected on the moon. Samples collected from deep below the lunar surface proved to be a better growth substrate than soils taken from the surface, per Gizmodo.

Researchers used the thale cress because it is a small flowering plant that has had its genome sequenced and well mapped, CNN reports.

“Ultimately, we would like to use the gene expression data to help address how we can ameliorate the stress responses to the level where plants—particularly crops—are able to grow in lunar soil with very little impact to their health,” Paul tells CNN.

These findings may even apply to growing plants in Martian soil, a statement explains.