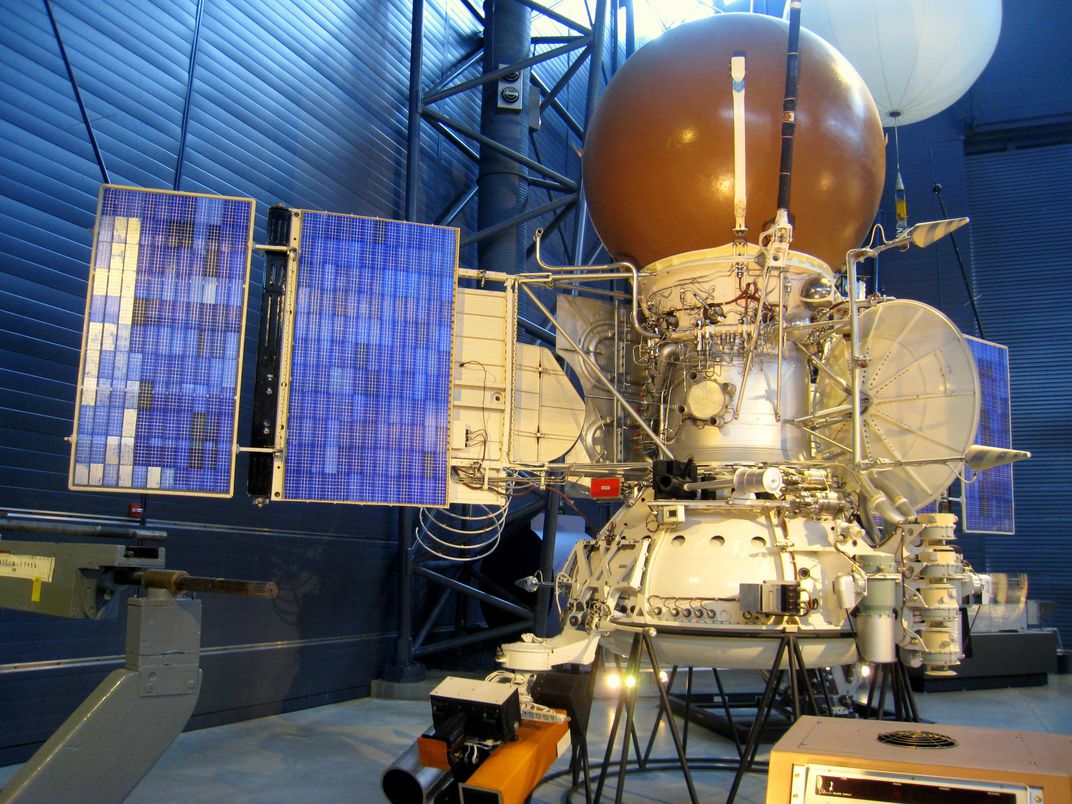 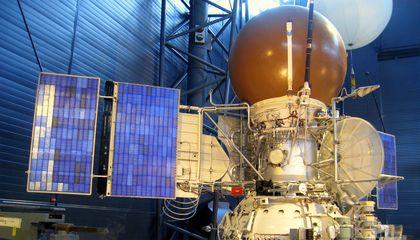 The world was thrilled this week as NASA’s Ingenuity helicopter pulled off something truly novel (see video above)—the first powered, controlled flight on another planet. But if you paid close attention, the precise wording of that accomplishment included qualifiers. Like the Wright brothers’ airplane, the Mars helicopter was preceded by balloons. In Ingenuity’s case it was a pair of aerobots that rode along with the Soviet Vega 1 and 2 Venus spacecraft and flew through the Venusian atmosphere in 1985. The episode is recounted in Jay Gallentine’s lively 2016 history of planetary exploration, Infinity Beckoned, from which the following excerpt is adapted.

WHAT’S IMPORTANT to understand about French space scientist Jacques Blamont is that he had this thing for balloons stretching back almost thirty years before the Soviet Vega spacecraft arrived at Venus in 1985.

In 1959, as a research fellow at the University of Minnesota, Blamont intermingled with a group of physicists engaged in studying the atmosphere by way of high-altitude balloons. “I was very impressed by what they were doing.” It was a fantastic idea, really, quite cheap compared to sounding rockets, with lots of hang time up at the edge of space. “And I decided to introduce balloons in the French program,” he resolved. “In 1966, our pres­ident General de Gaulle decided that we had to have a space program in collaboration with the Soviets. So I was sent by him with my boss, chief of the French space agency, to Moscow and we established a long-standing relationship.” Cultivating this involved one yearly meeting between repre­sentatives of the two space agencies. As Blamont continued, “At those meet­ings we would essentially elaborate and decide about the program. And then every time we had decided that it would be in a different place. So every two years it would be in the Soviet Union, and then in France, and it would always be in a different place. So we could know each other.”

Months later, Blamont was in the middle of a satellite project. On one otherwise unremarkable night, the biggest cliché in the world occurred: he had a dream. “This dream was that I could see a balloon in the Venus atmosphere. And I had never worked on Venus, so I don’t know why. But anyway, I got very impressed by this dream, so I wrote a proposal immedi­ately,” involving very small experiments carried on a handful of modestly sized balloons. He hand delivered the paperwork to [Soviet space scientist] Mstislav Keldysh late in ’67 during a Paris luncheon. Blamont already knew Keldysh well—in part due to the latter man’s excellent knowledge of French. Keldysh loved the balloon idea and pledged to work it on through.

But then a wave of stagnation hit. “Nothing happened!” said a whim­pery Blamont, sounding rather dejected. “We did not know at all what was happening inside the Soviet system, because they were extremely secretive. And so it was very hard to guess what they wanted.” According to him, the Reds basically sat on his idea for half a decade before coming back to France with a counterproposal. “They came up with the idea of a very large balloon with a laboratory. Floating laboratory. And we had to accept it.” That was a year before [Roald] Sagdeev came aboard the [Space Research Institute of the USSR Academy of Sciences]; French engi­neers struggled to prototype the concept. Forward movement ground to a stop from ’74 to ’76 owing to budget cuts and the election of a new French president. “But in ’76 we started moving again.” They about had the finer kinks ironed out when Sagdeev made a phone call to Blamont with news that the balloon was a go….

A COUPLE OF HOURS prior to the Vega 1 balloon’s entry into the Venus atmosphere on June 11, 1985, Bob Preston, lead American scientist for the balloon project at NASA’s Jet Propulsion Laboratory, gave a talk at JPL to a large audience gathered for the event. He spent the following hour or so waiting anxiously with Blamont in the mission’s control building. “We knew for months ahead, years ahead, virtually to the second or two, when we should hear something from the balloons,” commented Preston. That moment was supposed to occur just after 6:00 p.m. on the West Coast. “And it’s like many of these planetary missions: you know when something has to happen; you just don’t know if it’s gonna work. It’s a moment of ter­ror.” And Blamont definitely was nervous as hell, with the flight on auto­-pilot and building to crescendo in real time. From here on in there was nothing else he could do.

Decelerating from twenty-five thousand miles an hour, Vega 1’s lander—still encased in a heat-shielding ball—endured hundreds of G-forces as it began losing speed and altitude. POP went the ball top, 210,000 feet up, one parachute out and a timer coming to life, slaughtering seconds until that precise moment to cue the balloon release. If Vega’s timer failed, a backup would fill in. If the backup died, a pressure sensor waited to take over. In a blink three thousand feet disappeared, first timer working, ball opening, passing 200,000 feet with glorified furniture gliders easing the lifeguard ring off the top of the lander in a game of reverse ring toss. Out it whistled, 180,000, a separate parachute taking the initial shock of atmospheric con­tact and the ring split open and the folded balloon caught its first whiffs of acid clouds. It dropped quickly; thin air up here still. 177,000. Helium slowly crept through folds of Ftorlon fiber. 174,000 and going down, down, the parachute—snip—cut itself away and the freed balloon dropped like a safe to fight for its life.

Bob Preston: “We had had terrible problems at JPL with our tracking net­work, and getting it in shape. And we had worked just all hours for months ahead of time and we’d just finished getting the network ready for this experiment. So it really wasn’t tested as well as it should be. But we hoped.”

The trick is getting the darn balloon pumped up before it smacks the ground. But not so quickly that it bursts. Here, the thing could still fall for miles—but it’d been designed to operate only in the uppermost layer of clouds, where temperatures and pressures were much lower than near the ground. If the airship took too long to inflate, it’d get trapped in the heavy lower atmosphere and never be able to rise high enough to do any good.

“All we had in front of us was an oscilloscope that refreshed every sec­ond and showed us the spectrum of the receiver,” continued Preston, col­oring in the scene before him. “And we knew we should see the balloons at a particular time. The first balloon signal. We didn’t see it.”

Air thickening, 167,000. Balloon heating up and feeling the squeeze of rising pressure.

“Time kept marching by and seemed like an infinity and we didn’t see anything refreshing second by second.” Preston and Blamont stared dry-eyed at the display before them. It was indeed just after 6:00 p.m., Pasa­dena time. If it didn’t come then, it wouldn’t at all. “And finally, in one of the second refreshes, there was just the hint that there was a peak in the spectrum. And in the next second there it was, big and bold.”

Sagdeev’s phone erupted. “We heard a loud applause on the other end,” he remembered—one of those moments that was instantly burned into his long-term memory. At 164,000 feet above Venus, the orb’s inflation had arrested its own fall. JPL director Lew Allen got on the mike and congrat­ulated everyone on the unqualified successes to that point.

Preston couldn’t take his gaze off the screen. The event momentarily dis­rupted his command of the English language. After some effort he finally managed, “Wow.”

Earth rotated; as the signal “set” in the west, Venus was just rising in Spain and the Madrid dish grabbed it. Thousands of miles east of Blamont and nine hundred miles south of Sagdeev, Vega transmissions also hit Yevpa­toria’s big dishes and were funneled throughout the station. Different enti­ties stripped off what they needed and ran decoding cycles to interpret. One group got lander health; another cared only about engineering data.

And then another part of the transmission flowed into the rear input panel of Viktor Kerzhanovich’s spectrum analyzer. Its tiny screen displayed a graph of frequency versus signal strength and had been previously dialed in to match that of the balloon. “This was the first place where you see the signal; you see it from the spectrum analyzer and it’s a spike,” he described. But the analyzer was blank, blank, blank, blank; maybe there’s trouble? Yevpatoria wasn’t privy to the open phone line. Things suddenly lit up. “Then I see there’s a signal!” Kerzhanovich yelled with joy. To use the slang of the station, they had a “strong horse”—the radio’s carrier signal—along with a “good rider,” or solid data.

The balloon rose, higher still, back past 170,000, climbing farther before leveling off at 177,000 feet, more or less exactly where envisioned. In stark contrast to the hellish ground conditions, “it’s essentially at room tem­peratures,” Kerzhanovich described this altitudinal zone. Pressures there approximate what’s at the summit of an eighteen-thousand-foot mountain; humans could themselves balloon on Venus at that height, in an open gon­dola no less. We’d just have to don scuba tanks.

Rapunzeling down forty-three feet underneath the plump round orb, a gondola unfolded and came to life. “The balloon itself? It becomes a heat source, and it disturbs the air,” lectured Kerzhanovich. “The further the balloon is from the gondola, the better off you are!” Closest to the balloon rode an upside-down ice-cream cone: the antenna, five and a half inches wide, broadcasting Radio Venus directly to Earth on a whopping five watts of power. Underneath it hung a pair of straps, which in turn supported the radio transmitter and mini electronic brain. Jutting out from the trans­mitter’s base, right next to sensors for pressure and light levels, a nine-inch rod of carbon fiber held a toy-like plastic propeller spinning wildly in the bracing Venusian squalls. At the very bottom, separated by another length of straps, hung miniature packs of lithium batteries—along with the American-designed device to examine cloud density. Everything, top to bottom, had been slathered in weird paint to help guard against the fum­ing acidity of the atmosphere. A separate, expendable component to man­age the balloon’s inflation had been slung underneath them all. Presently it fell away, taking spare ballast along with it.

It happened in a microsecond. Turbulence abruptly heaved the balloon askew, yanking the gondola with such force that ground antennas briefly lost their lock on its radio signal. The airship’s inaugural broadcast came through as pure gibberish. But then the ride settled, their balloon shrug­ging off any malaise. Off it went, bobbing westward through the sky like nothing ever happened.

Reprinted by permission from Infinity Beckoned, by Jay Gallentine. 2016, University of Nebraska Press. 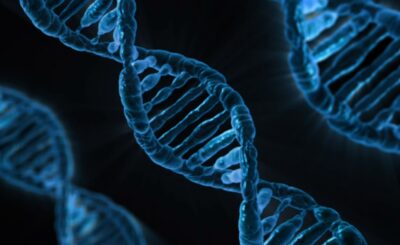 The Science of Aliens, Part 2: What Kind of Genetic Code Would Extraterrestrials Have? 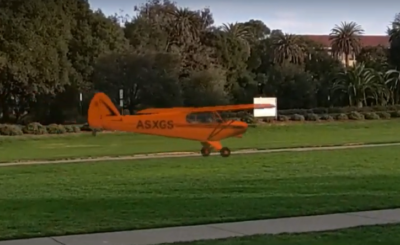 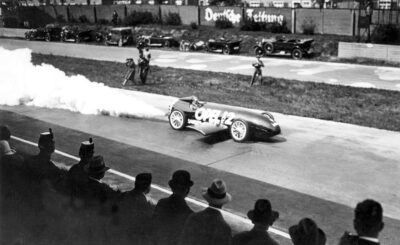 A Century Before Elon Musk, There Was Fritz von Opel